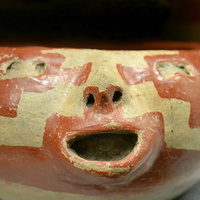 This exhibit, based on WFU student honors thesis research, explores artifacts left behind by a mysterious civilization that constructed massive cities and stepped pyramids in West Mexico.  Little is known about this ancient culture, except that the people buried their dead in shaft tombs, which often contain grave offerings of jewelry, weapons, textiles, and more commonly, ceramic vessels, which were filled with food and drinks for the dead. The objects featured in the exhibit represent a sample of the Museum’s recently authenticated West Mexican Shaft Tomb ceramics.  Admission is free.