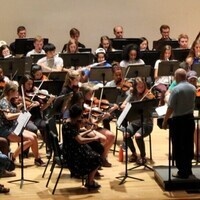 The Wake Forest Orchestra presents its end-of-semester concert.  The first half will be in memoriam of the twentieth anniversary of 9-11. The second half of the concert will feature the last three movements of Tchaikovsky's monumental Fourth Symphony.  The program will be conducted by Orchestra Director David Hagy, who, after 27 years in this position, will be retiring at the end of this academic year.