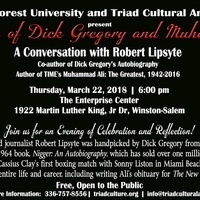 The Genius of Dick Gregory and Muhammad Ali: A Conversation with Robert Lipsyte

Join us for an evening of celebration and reflection on legendary social activist and trailblazing comedian, Richard Claxton Gregory, and one of the 20th century's most iconic athletes, Muhammad Ali. Award-winning author and journalist Robert Lipsyte was handpicked by Dick Gregory from a field of accomplished writers to co-author his 1964 book, Nigger: An Autobiography, which has sold over one million copies. In that same year, he covered a young Cassius Clay’s first boxing match with Sonny Liston in Miami Beach and went on to report on Muhammad Ali’s entire life and career, including writing Ali’s obituary for The New York Times in 2016. Lipsyte will discuss those experiences and share his memories of the enduring legacies of Dick Gregory and Muhammad Ali. This event is a collaboration between Wake Forest University and Triad Cultural Arts.