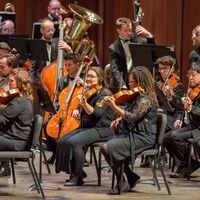 Join the Florida State University Symphony Orchestra (USO) as they take the stage for an evening filled with spectacular symphonic stories.  The flagship orchestra of the Florida State University College of Music, the USO has been under the batons of such luminary conductors as Ernst von Dohnányi, Aaron Copland, and Matthias Bamert. The orchestra has enjoyed collaborations with a wide variety of major artists and composers, including Joshua Bell, Andre Watts, and the Canadian Brass, as well as composers Ellen Taaffe Zwilich, and John Harbison, among others.  The USO can be heard on the Naxos label and has been featured nationally on PBS broadcast.  The program includes:

Modest Mussorgsky: Pictures at an Exhibition