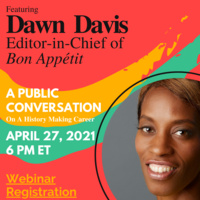 A conversation with Dawn Davis

Last year Dawn Davis became one of the few Black top editors in Condé Nast’s history. In her wide-ranging role, she will lead the Bon Appétit brand and have editorial control of the company’s food outlets Epicurious, Healthyish and Basically across all media, including print, digital, social media, and video.

Dawn Davis brings over 30 years of experience as a prominent editor and executive who has been one of the few Black power players in the book world. In her role as a vice president at Simon & Schuster, she founded and published 37 Ink, an outlet promoting and advancing the stories and work of marginalized voices. She also brings her avid cooking skill and a general passion for culinary cultures to this role.

Ms. Davis is the author of If You Can Stand the Heat: Tales From Chefs and Restaurateurs, which included profiles of chefs such as Edna Lewis and Anthony Bourdain.

Join the Center for RECAAL for a riveting conversation with this powerful business leader about her history-making career plans to advance African American voices in the culinary world.