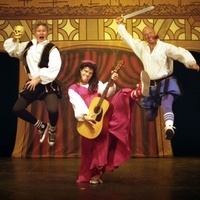 Called “A breathlessly irreverent and pun-filled romp!” by the Washington Post, the production proposes that Shakespeare had written a recently-discovered rough draft of all his plays that presents his most famous characters interacting comically onstage together. Theatrical zaniness? Yea, verily.

We encourage those with a WFU I.D. to pre-register so we can keep track of available seats for the community at large.