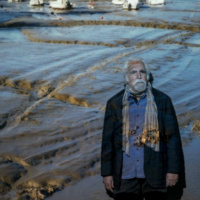 peter campus’ contributions as a pioneer of video art have not been reflected in a larger awareness of his work. This is due in part to the technical complexities of his early interactive video installations, which has limited their opportunities for exhibition. All of campus’ works, from the closed-circuit video installations he began making in 1971 to his most recent videos, may be said to explore the processes of perception and vision, exploiting the specific characteristics of both the electronic and later the digital image.

For visitors, the work in video ergo sum is truly experiential, often requiring viewers to actively engage the artworks’ mechanisms and thereby create the work itself. Thanks partly to the use of the "live image," the effect of the artist’s interactive works from the 1970s is uncanny, generating disconcerting iterations and repetitions of one’s own image.

In 1978, peter campus set aside video and began to devote himself to photography, working outside the studio in his immediate environment. When he returned to video in 1996 the medium was now digital and the equipment much more manageable. The “videographs” he produced, beginning in 2007, were composed of static, unedited shots; intimate, poetic, and quietly experimental.

campus’s treatment of the images, at the level of the pixel, creates a certain degree of abstraction, engaging the viewer in a new exercise of perception and interpretation. His intense connection to the site chosen and his attention to light, color and framing may best be seen in his most recent four-channel video, created for this exhibition and presented in this instance at the Hanes Gallery. Filmed in a natural setting in ultra-high definition (4K), in convergence d’images vers le port, the visitor’s gaze intersects with the sensibility and emotion of the artist’s vision.

Curator: Anne-Marie Duguet. Exhibition organized by the Jeu de Paume (Paris), with the participation of the Hanes Art Gallery-WFU, and the Southeastern Center for Contemporary Art, in collaboration with Cristin Tierney Gallery (NYC), for its presentation in Winston-Salem, NC. Additionally, Reynolda House Museum of American Art is presenting works of peter campus in support of video ergo sum.