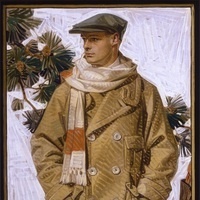 Leyendecker and the Golden Age of American Illustration

One of the most prolific and sought-after artists of the golden age of American illustration, Joseph Christian Leyendecker captivated the public with striking images and fashionable depictions of handsome men and glamorous women. With his instantly identifiable style—“The Leyendecker Look”—he helped shape the image of a nation, creating dozens of enduring icons and some of the earliest national advertising brands. His approach to his own career influenced an entire generation of younger artists, most notably Norman Rockwell, who specifically emulated Leyendecker.

J.C. Leyendecker helped shape American visual culture over a five-decade career, both molding and reflecting the country around him through his illustrations. His images became an integral part of American life in the first half of the last century.