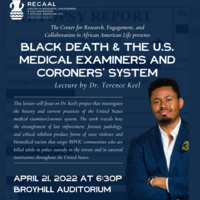 The Center for RECAAL presents 'Black Death & The U.S. Medical Examiners and Coroners’ System' a lecture by UCLA professor and scholar, Dr. Terence Keel. Dr. Keel is an Associate Professor with a split appointment in the Department of African American Studies, and the UCLA Institute for Society and Genetics. He has written widely about American biomedical
science, religion, law, and modern thought.

This lecture will focus on Dr. Keel's project that investigates the history and current practices of the United States medical examiner/coroner system. The work reveals how the entanglement of law enforcement, forensic pathology, and ethical nihilism produce forms of state violence and biomedical racism that target BIPOC communities who are killed while in police custody in the streets and in carceral institutions throughout the United States.