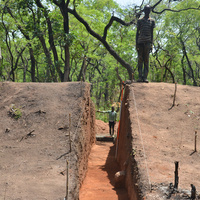 Canceled: Lecture: Archaeology of the Oyo Empire of West Africa

Dr. Akin Ogundiran, Professor of Africana Studies, Anthropology, and History at University of North Carolina - Charlotte, will speak about the new archaeological evidence revealing the strategies of political expansion, economy, and domestic life in one of Africa’s largest states, the Oyo Empire (ca. 1570-1830), and the roles of the environment in its rise and demise.  Admission is free.