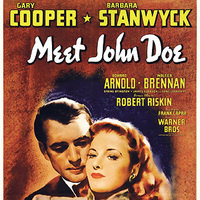 Meet John Doe (1941) is Frank Capra's wonderful, message-laden populist tale about the common man. There will be a lecture the next day and this showing is part of the American Lectures in the History of Religions: The Cinematic Sacred being hosted at Wake Forest with Jeffrey Stout, Professor of Religion, Princeton University on Wednesday, February 27  5:00p.m.  The lecture is titled, "Fake News, Modern Horrors, and Democratic Hope: Why Capra’s Populist Christ Figure Fell Flat."

This film screening is in advance of a lecture the following evening to be given by Jeffrey Stout on Wednesday, February 27.