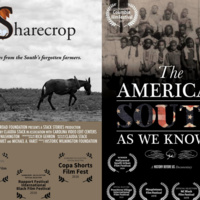 Filmmakers Lunch and Learn: "Sharecrop" and "The American South As We Know It"

Join the School of Divinity and a/perture for a lunch and learn with Frederick Murphy and Claudia Stack, the filmmakers of "Sharecrop" and "The American South As We Know It," which were screened at a/perture cinema in Downtown Winston-Salem on Thursday, November.

This event is free and open to the public. RSVP required.

The filmmakers, Frederick Murphy and Claudia Stack, are collaborating to create events that help audiences to understand the experiences of African Americans during the segregation era, the impact of historical trauma, and interventions centered on the healing of historical trauma.

Stack’s "Sharecrop" documentary is an award-winning film that features stories from ten former sharecroppers in NC, SC and MS.    "Sharecrop" highlights the South’s “forgotten farmers” through interviews and rare vintage images. To view the "Sharecrop" film trailer click here .  "Sharecrop" has screened at film festivals and campuses, and it was featured at the 2018 National Council for Black Studies conference. Stack’s previous films about historic African American schools have screened at National Trust for Historic Preservation conferences, campuses, and libraries.

Frederick Murphy is an innovative filmmaker and a licensed professional counselor.  Murphy conveys oral history of the segregation era with his award-winning film "The American South As We Know It".   To view "The American South As We Know It" film trailer click here. This film captures the stories of the survivors of Jim Crow, courageous individuals who didn’t make the headlines.  Murphy travels across the country providing the presentation titled Utilizing Film to Better Understanding Historical Trauma in the African-American Community.