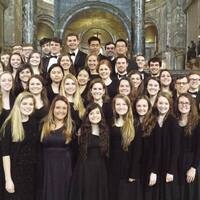 Brian Gorelick conducts the Fall Choral Concert, a combined appearance by the Wake Forest Concert Choir and the Wake Forest Chamber Choir in a program titled An Evening in London.  The choral compositions selected for the program will be settings of liturgical prayers, Biblical texts, poetry, and lyrics by prominent British composers from the Renaissance to Lennon-McCartney.  The closing work will be Handel's Zadok the Priest, composed for the coronation of King George II in 1727.