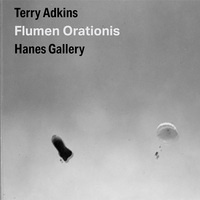 On display in the Hanes Gallery is a video installation from the late Terry Adkins, Flumen Orationis (from The Principalities). The video is 41 minutes in length and playing on loop in the Main Gallery through February 10. Come by the gallery during regular hours, Monday - Friday from 10 am to 5 pm to view the work.

Artist Terry Adkins’ video, Flumen Orationis, combines the audio of Rev. Dr. Martin Luther King’s 1967 speech, “Why I am Opposed to the War in Vietnam” with Jimi Hendrix’s various performances of an antiwar ballad, “Machine Gun.” The audio plays over a series of stereographic images that animate early innovations in air travel from hot air balloons, to dirigibles, to small airplanes. Honoring Hendrix's time as a paratrooper in the Army’s 101st Airborne Division, Adkins creates a dense narrative of flight, liberation, and the complexities of war.