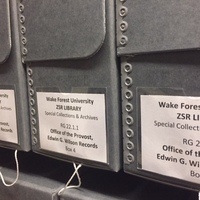 This exhibit will focus on the significant changes witnessed by Dr. Wilson during his many administrative positions. Selected documents will illustrate historical events such as integration, the creation of the study abroad programs, the establishment of the Wake Forest Press, an increasing growth of athletic programs, collection purchases for ZSR Library, among others.