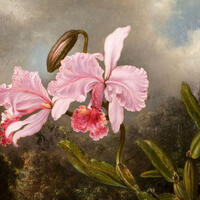 "Cross Pollination" takes flight from the influential series of paintings The Gems of Brazil (1863-64) by Martin Johnson Heade but expands outward to explore pollination in nature and ecology, cultural and artistic influence and exchange, and the interconnection between art and science, extending from the nineteenth century into the twenty-first.

This exhibition was created by Thomas Cole National Historic Site, The Olana Partnership at Olana State Historic Site, and Crystal Bridges Museum of American Art, Bentonville, Arkansas. Its tour is organized by Crystal Bridges. Support for this exhibition and its national tour is provided by Art Bridges. Additional major support has been provided by the Henry Luce Foundation.

Reynolda House is grateful to the following sponsors for their support of “Cross Pollination:”

Additional major support has been provided by The Henry Luce Foundation.