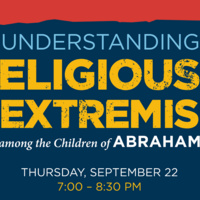 Dr. Charles Kimball, former professor Religion Dept. Chair at Wake Forest University and now Presidential Professor at the University of Oklahoma, will deliver the Carlton Mitchell Interfaith Lecture entitled “Understanding and Countering Religious Extremism among the Children of Abraham.” Ordained as a Baptist minister, Kimball received his Th.D. from Harvard University in comparative religion with specialization in Islamic Studies. He is the author of five books, including When Religion Becomes Lethal: The Explosive Mix of Politics and Religion in Judaism, Christianity, and Islam (Jossey-Bass/Wiley, 2011). His previous book, When Religion Becomes Evil (HarperOne, rev. ed. 2008), was named one of the "Top 15 Books on Religion" by Publishers Weekly and one of the top ten books of the year by the Association of Parish clergy. Kimball has also been intimately involved in interreligious dialogue between Jews, Christians and Muslims for over three decades, at home and abroad in the Middle East. Given the many recent events both here and abroad, this promises to be a highly relevant and informative presentation.

The Carlton Mitchell Interfaith Series honors Dr. Carlton T. Mitchell (WFU ’43), who taught in (and also Chaired) the Department of Religion at Wake Forest University for thirty years (1961-91). Dr. Mitchell, who died in 2013, was a leader in building interfaith cooperation and understanding. Interfaith Winston-Salem sponsors the series to honor Dr. Mitchell’s pioneering efforts by offering lectures, concerts and other activities that help people of Winston-Salem better understand the religious differences of their neighbors. Other co-sponsors of this event include the WFU Dept. for the Study of Religions, WF School of Divinity, WF Office of the Chaplain, Knollwood Baptist Church, Shepherd’s Center of Greater WS, and the Mitchell family, among others.