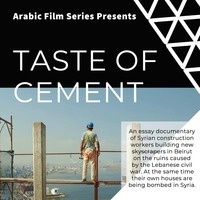 An essay documentary of Syrian construction workers building new skyscrapers in Beirut on the ruins caused by the Lebanese civil war. At the same time their own houses are being bombed in Syria.

Co-sponsored by the Middle East & South Asia Studies Program, the Arabic Program, and Every Campus a Refuge-WFU.