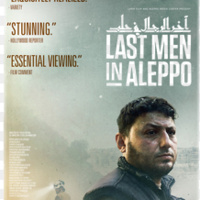 After five years of war in Syria, the remaining citizens of Aleppo are getting ready for a siege.  Through the eyes of volunteer rescue workers called the White Helmets, this documentary allows viewers to experience the daily life, death, and struggle in the streets, where they are fighting for sanity in a city where war has become the norm.  Winner, 2017 Sundance World Cinema Grand Jury Prize for Documentary.  90 minutes.  Arabic/English subtitles