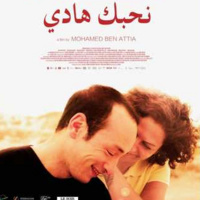 Hedi, a young man with great dreams, is struggling his way thorugh social conventions in Tunisia.  While his mother tries to decide his life for him, Hedi meets Rim and suddenly he discovers that his world goes beyond and above conventions.  Drama, 90 minutes.  Golden Athena Prize for Best Picture at the Athens International Festival (2016).