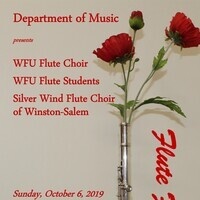 The WFU Department of Music presents the 32nd annual Flute Fest concert on Sunday, Oct 6 at 3:00 p.m. in Brendle Recital Hall. The concert will feature WFU flute students, the Silver Wind Flute Choir of Winston-Salem and a Community Flute Choir, all under the direction of Professor Kathryn Levy. Repertoire will include music of William Boyce, Gabriel Fauré, Georg Philippe Telemann, Ralph Vaughan Williams, Katherine Hoover, Peter Ilyich Tchaikovsky, Ian Clarke and Nicole Chamberlaine. In the tradition of past Flute Fest concerts, community flutists of all ages will join the other performers to form a mass flute choir which will perform the popular Canon by Johann Pachelbel to end the concert.