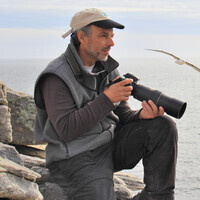 Writing Beyond Words: Perspectives on Earth and Humanity with Carl Safina

All living things have a story to tell. At a time when words often fall flat, Carl Safina looks to the natural world -- and all its inhabitants -- to tell the story of interconnectedness between all living things. Drawing on his latest book, Beyond Words: What Animals Think and Feel, Safina's public lecture will explore the scientific, moral and social dimensions of our relationship with nature. By diving into animals' lives and minds, Safina will thoughtfully tackle 21st century issues that affect all living things, including habitat conservation and extinction.

This event is free and open to the public. Be sure to register to reserve your seat.

About Carl Safina: Carl Safina is an award-winning writer, conservationist and marine ecologist.  His writing about the living world has won a MacArthur “Genius” prize, Pew, and Guggenheim Fellowships; book awards from Lannan, Orion, and the National Academies; and the John Burroughs, James Beard, and George Rabb medals.

After earning his PhD in ecology from Rutgers University,  Safina spent a decade working to ban high-seas drift nets and overhaul U.S. fishing policy. He has developed his expertise as a leading science communicator and is the first Endowed Professor for Nature and Humanity at Stony Brook University (where he formerly co-chaired the Alan Alda Center for Communicating Science). Safina is also the founding president of the not-for-profit organization, The Safina Center. He hosted the 10-part PBS series Saving the Ocean with Carl Safina, about the "unsung heroes" who are helping to restore marine life. His TED Talk, "What are animals thinking and feeling?" has over two million views.

Safina’s written corpus digs deep into the power of the earth and its inhabitants, with a particular focus on the human relationship with the natural world. His work appears in The New York Times, TIME, Audubon, and on the Web at National Geographic News and Views, Huffington Post, CNN.com, and elsewhere. His book, Song for the Blue Ocean,  Safina’s latest book, Beyond Words: What Animals Think and Feel, takes readers into animals’ lives and minds, reporting on surprising similarities while thoughtfully tackling issues that affect all living things, including habitat conservation and extinction.