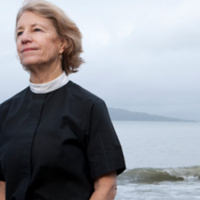 Climate Change: A Matter of Faith, with Sally Bingham, Founder of InterFaith Power and Light

If you haven’t thought of climate change as a matter of faith, Rev. Bingham hopes to inspire you to do so.  Climate change is the greatest moral challenge of our time and the religious voice is the one chance we have to really motivate change in the way we think about and use energy.  Global warming which is causing the climate to change is no longer just an environmental or political issue.  It is a moral issue and the decisions we make today to either address it or not will dictate the future.  Come hear one of the country's leading religious voices on climate issues, and learn of the hopeful work the church is called to undertake on behalf of God's creation.

Free and open to the public.

Part of the Ecotones of the Spirit speaker & event series sponsored by the Food, Faith, and Religious Leadership Initiative at the School of Divinity.

The Reverend Canon Sally Grover Bingham, an Episcopal priest and Canon for the Environment in the Diocese of California, was one of the first faith leaders to fully recognize the changing climate as a moral issue. She is founder and president of The Regeneration Project and its Interfaith Power & Light campaign, which currently has 15,000 congregation members in forty states. Rev. Bingham serves on the national board of the Environmental Defense Fund, and the advisory board of both the Union of Concerned Scientists and Climate One. She has received many awards including in 2012, the Rachel Carson Women in Conservation Award from the Audubon Society and the Life Time Achievement Award from the Festival of Faiths and in 2014, the Bishop of California Green Cross Award.  Rev. Bingham is the lead author of Love God Heal Earth, a collection of 21 essays on environmental stewardship by religious leaders, published by St. Lynn’s Press.

About Ecotones of the Spirit

An ecotone is the edge where two ecosystems meet - field and forest, ocean and estuary - and is a place rich with biological diversity, abundance, and opportunity. In this speaker series, we will explore the conversational ecotones where food justice meets faith, climate activism meets religious leadership, and where contemplative spirituality encounters the ecological crisis. Bringing together food activists, writers, and theologians, these gatherings will create a space where ecological and social challenges - food insecurity, climate change, environmental racism - can be held in tension with the Psalmist's call to "be still and know that I am God."

The series begins on Thursday, March 19, and concludes with a half-day conference on Tuesday, April 14th.