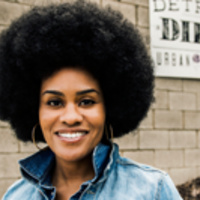 Pashon Murray, founder of Detroit Dirt: Urban Renewal From the Ground Up and a media fellow at MIT with Van Jones and others in the green jobs movement, will speak about food, faith, and the empowerment of underserved communities in Detroit through the creation of green jobs.

View Pashon's famous video (a spoof off of this Cadillac ad):

Free and open the public.

Part of the Ecotones of the Spirit speaker & event series sponsored by the Food, Faith, and Religious Leadership Initiative at the School of Divinity. This event is co-sponsored by the WFU Center for Innovation, Creativity, and Entrepreneurship, the WFU Masters of Sustainability program, and the Forsyth County Food Consortium.

As a Grand Rapids Christian High graduate, Pashon proceeded to Texas Southern University, where she earned her degree in Business Marketing and played on the TSU basketball team. Her family owned a waste transportation business during her childhood, and she returned to her roots in Grand Rapids to help her father run his maintenance company. The opportunity to get involved with Leadership in Energy and Environmental Design (LEED) projects developed while she pursued her entrepreneurial dreams. This led to the launch of her minority certified company Waste Trends, which provided roll-off containers for construction site cleanup and recycling for reusable materials.

Pashon spent two years (2008/10)  developing and implementing training programs, curriculums, and conferences on sustainability for Oakland Community College, Wayne State University, and Michigan Works.  Ford Motor Company and Wayne State University sponsored the Sustainable Technology Fair 2011 it was a success due to Pashon’s efforts.  Pashon began working on a Masters of Urban Planning Program (MUP) at Wayne State and in the past has lobbied for Repower America, National Wildlife, and the Sierra Club.

In 2010 Pashon co-founded Detroit Dirt, a local composting and biomass Collection Company. Detroit Dirt specializes in providing compost and biomass solutions for the Metro Detroit community.  Detroit Dirt’s closed loop model process was designed by Pashon to help revitalize Detroit.  In 2012, Pashon launched Sustainable Integrations (SI), a Detroit based 501(c) (3). SI was formed to combat environmental deterioration by learning, educating, leading and serving the public through programs and services on sustainable land utilization, ecosystem remediation, renewable energy practice and improved waste management.  Detroit Dirt and SI use biodynamic sustainable designs to integrate methods in the community to ensure the economy, and society can continue to exist without destroying the natural environment.

Pashon portrayed herself in March 2014, in an ad for Ford Motor Co which went viral on YouTube with over 1.5 million hits. In May of 2014, she appeared as a guest on NPR, Newsweek named Pashon as one of 13 Disruptive Women you can bet on and she was a panel guest for the USGBC Midyear Salon that was held in Detroit. Additionally in May 2014, she was named as a Directors Fellow of the MIT Media Lab.

Her current list of clients include Bedrock, Blue Cross, General Motors, Ford Motor Co., Team Detroit, Detroit Zoological Society, local restaurants and Detroit Public Schools. As a consultant, she advises her corporate clients on integrating a culture of sustainability within their organizations and trains their staff on practicing sustainability in their daily activities.  Pashon is a Member of Agriscience Advisory Board which is located on Belle Isle.  It is quite noteworthy that she will be working with MIT on developing soil variations through a Micro Biome Research Project, which will lead to Detroit Dirt products to be launched in the spring of 2015.  Pashon’s most recent achievements are being named one of 8 Modern Farmers in the fall issue of Modern Farmer magazine and named as an Award Winner in Martha Stewart American Made, Credit Suisse New Markets Entrepreneur Circle, and for the United Nations Foundation Global Accelerator – Inaugural Women’s Entrepreneurship Day –as one of the Top Ten Women to Watch. As a proud resident of the Motor City and one of its most energetic advocates, Pashon has a passion for making Detroit the greenest city in America.

About Ecotones of the Spirit

An ecotone is the edge where two ecosystems meet - field and forest, ocean and estuary - and is a place rich with biological diversity, abundance, and opportunity. In this speaker series, we will explore the conversational ecotones where food justice meets faith, climate activism meets religious leadership, and where contemplative spirituality encounters the ecological crisis. Bringing together food activists, writers, and theologians, these gatherings will create a space where ecological and social challenges - food insecurity, climate change, environmental racism - can be held in tension with the Psalmist's call to "be still and know that I am God."

The series begins on Thursday, March 19, and concludes with a half-day conference on Tuesday, April 14th. Learn more about the series at divinity.wfu.edu/ecotones.