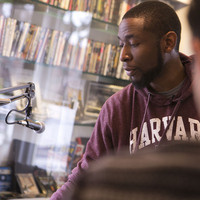 9th Wonder, a Winston-Salem native, is a Grammy-Award winning producer, DJ, and lecturer. Since his introduction to hip-hop, 9th has been immersed in the music and culture of the art form, while gaining experience in music theory throughout his youth with a culmination in 1998 when he formed the critically acclaimed trio, Little Brother. In 2003, he landed his first major label placement with Jay-Z followed by a collaboration with Mary J. Blige, that garnered 9th his first Grammy Award win in 2005.

In 2010, he was invited by Dr. Mark Anthony Neal, a professor in Duke University's African American Studies Department, to co-teach a hip-hop course and in 2012 9th became a Harvard Fellow at the Hutchins Center for African and African American Research.

Through the years, he has continued to work in the industry, producing music for Destiny’s Child, Ludacris, Murs, Drake and Nas to name a few. 9th is currently an adjunct professor at Duke, the Director of N.C. Central University’s newly launched Hip-Hop Institute and CEO of It's a Wonderful World Music Group.