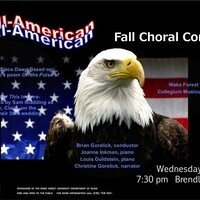 The Wake Forest choirs will begin the 2016-17 concert season with a program
entitled “All American”, featuring the Wake Forest Concert Choir and the Collegium Musicum Vocal Ensemble.  All of the music and texts of the choral works presented will be by American artists or come from our country’s traditions and history. The featured work will Wake Forest Professor and Composer-in-Residence Dan Locklair’s Since Dawn, written in 1996 for the Year of the Arts, and presented on this program in a new version for two pianos, chorus, and narrator.  Christine Gorelick will join the combined choirs to speak the words of Maya Angelou’s poem On the Pulse of Morning and Music Department faculty Joanne Inkman and Louis Goldstein will be the pianists. Concert Choir will sing American music by Randall Thompson, Moses Hogan, and Aaron Copland, and also perform the world premiere of Locklair’s newest choral composition, For This Is Love, commissioned by Wake Forest Professor Sam Gladding as a gift to his wife, Claire, on the occasion of their 30th wedding anniversary. Collegium will present settings of American texts composed by William Billings, Stephen Foster, Charles Ives, and Vincent Persichetti. Please call the Music Department Office at 758-5026 for more information.

Free and Open to the Public.

Free and Open to the Public.