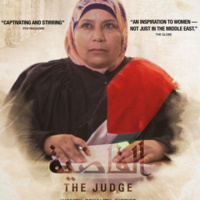 When she was a young lawyer, Kholoud Al-Faqih walked into the office of Palestine's Chief of Justice and announced she wanted to join the bench.  He laughed at her.  A few years later, Kholoud became the first woman judge to be appointed to the Middle East's Shari'a (Islamic law) courts.  The Judge offers a unique portrait of Judge Kholoud -her brave journey as a lawyer, her tireless fight for justice for women, and her drop-in visits with clients, friends, and family.  The film illuminates some of the universal conflicts in the domestic life of Palestine -custody of children, divorce, abuse- while offering a look at the life for women and Shari'a.  82 minutes.