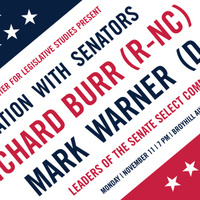 A Conversation with Senators Burr and Warner

Wake Forest University presents a conversation with Senators Richard Burr (R-NC) and Mark Warner (D-VA), Chair and Vice-Chair, respectively, of the Senate Intelligence Committee. Kami Chavis, the Associate Provost for Academic Initiatives, Professor of Law, and Director of the Criminal Justice Program, will be moderating the conversation between the two that will focus on the work they have been doing as leaders of the Senate Intelligence Committee and the weighty issues that are part of the committee’s work during this unique time in our political history. This first event presented by the Burr Center for Legislative Studies at Wake Forest will take place in Broyhill Auditorium in Farrell Hall.

Senator Burr is a 1978 graduate of Wake Forest, recipient of the University’s Distinguished Alumni Award in 2013 and a frequent visitor to campus. The Burr Center for Legislative Studies was established in 2018. Senator Mark Warner was the 2006 Commencement speaker at Wake Forest and the recipient of an honorary doctor of laws degree.

I think that the event was run very poorly and should not have been held at Wake Forest University. Not only was there no room for students, the room used was too small, and there was not a registration available for students. It brought no worth to this campus as it was just a show of the outdated, good ole boys club that is politics today. Instead of opening up for questions, they were asked what type of music they liked. From a school that supposedly supports critical thinking, I found this to be very disapointing. This event could have been much more valuable, but the way it was run decreased its value immensley.

I was unable to get in, which was very disappointing since I inquired about the event two weeks before. It was difficult to understand why such a high profile event was held in such a small venue, but perhaps that was stipulated by the speakers.