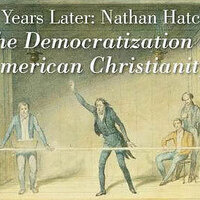 To mark the 25th anniversary of Nathan’s Hatch’s seminal book, The Democratization of American Christianity, Wake Forest University will host a half-day symposium February 6, 2015 sponsored by the School of Divinity, the Departments of History and Religion, the Humanities Institute, and the Office of the Provost.

Seven highly respected scholars of American religious history will offer reflections on the influence of Dr. Hatch’s seminal study and critically assess the work, including challenges since its publication.