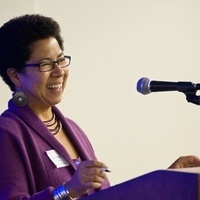 "From Black Power To Black Lives Matter: Mapping The Terrain Of The Black Freedom Movement"

Dr. Barbara Ransby is an historian, writer, and longtime political activist. She has published dozens of articles and essays in popular and scholarly venue, and is most notably the author of a multi award-winning biography of civil rights activist Ella Baker, entitled Ella Baker and the Black Freedom Movement: A Radical Democratic Vision, (University of North Carolina, 2003). The book won the following national awards:

Dr. Ransby’s second book published in 2013 by Yale University Press is a political biography of Eslanda Cardozo Goode Robeson, entitled: Eslanda: The Large and Unconventional Life of Mrs. Paul Robeson. This book wqas selected as a Choice Outstanding Academic Title for 2013 in the North America Category, and won a Honorable Mention for the 2014 Los Angeles Book Festival in the Biography/Autobiography Category.

In addition to serving in administrative roles as Department Chair and Interim Vice Provost for Programs and Planning, Dr. Ransby serves on the editorial board of the London-based journal, Race and Class, the advisory board of The Chicago Woods Fund, and a number of non-profit, civic, and media organizations. In 2012 she became the second Editor in Chief of Souls: A Critical Journal of Black Politics, Culture and Society. Professor Ransby received a BA in History from Columbia University and an MA and PhD in History from the University of Michigan, where she was a Mellon Fellow. She is currently a Distinguished Professor at University of Illinois at Chicago in the Departments of African American Studies, Gender and Women’s Studies and History. She also directs the campus-wide Social Justice Initiative at UIC.

The Anna Julia Cooper Center is an interdisciplinary research center that advances justice through intersectional scholarship. It is led by Professor Melissa Harris-Perry.